The UK’s Top 10 Streamed Songs of All Time 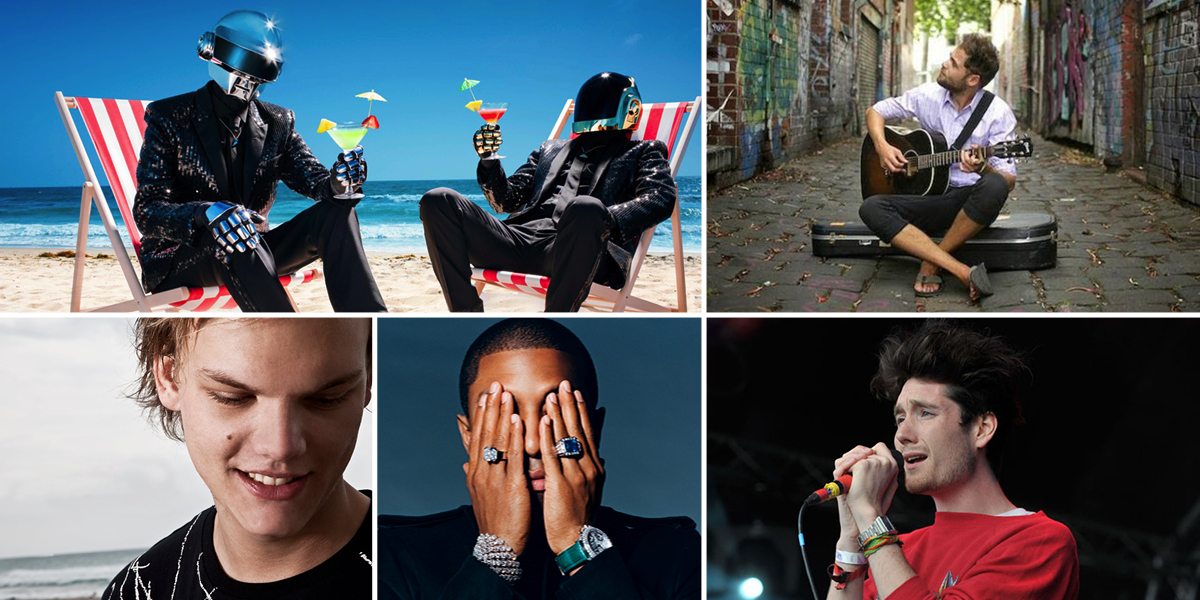 This summer The Official Charts Company revealed which were the most-streamed tracks of all time in the UK. Pompeii by Bastille won the golden prize after having received a total of 26.6 million streams in two years, jogging past Daft Punk’s Get Lucky (on 24.5 million streams) and flying past Passenger’s Let Her Go in third place, with 21.7 million streams.

To watch a video in Creation 5, just tap the video title.

The fact that Pompeii has had over 26 million streams is amazing,” said Bastille frontman Dan Smith. “We’re really, really happy. When we made Pompeii we never even saw ourselves as a band that would be even remotely mainstream or anything like that. We thought, hopefully, some people will like the song; maybe we’ll sell enough albums to be able to make a second album and not be jobless so soon after we quit our jobs in the first place.”

“Everything that’s happened with Pompeii has completely blown our minds and the fact that we’re still doing this as a job, the fact we get to travel round the world and go to different countries off the back of the album is insane and we just feel really lucky and glad that people stream too because streaming is important.”

Cranking up the volume, this magical electro tune always gets the party started and never fails to get you in the mood to get up and dance. Co-Written by French house music duo Daft Punk, Pharrell Williams and Nile Rogers, the song won Record of the Year and Best Pop Duo/Group Performance at the 56th Grammy Awards. Since it’s release in 2013 up until June 2014, the song had reached 24.5 million streams in the UK. This “formidable” and “old school disco-jam”, as stated by Will Hermes (Rolling Stone), is a true gem in the electronic music world, and a delightful breath of fresh air.

Let Her Go, released in June 2012 by British singer-songwriter Passenger, is the second single from his third album, All The Little Lights. After a Dutch fan e-mailed Passenger asking him to introduce the song to some Dutch radio stations because he thought it would become a big hit in the Netherlands, the song began trending and found huge commercial success with the Dutch public. After its initial success, the song soon reached Nº1 in the Charts worldwide, including Nº2 in the UK Singles Chart and Nº5 on Billboard Hot 100. Passenger’s first international success racked up a total of 21.7 million streams, sold over 1 million digital copies in the UK and over 4 million in the US as of July 2014. The song was also nominated for British Single of the Year at the 2014 BRIT Awards.

“Suddenly, whether you like it or not, you’ve got this massive song and your whole life changes,” said the British singer-songwriter.

A “fun experiment” is how Swedish DJ Avicii refers to this track. He and soulful American singer-songwriter, Aloe Blacc, wrote the lyrics in a couple of hours and released what was to become 2013’s summer anthem. Released in June 2013, Wake Me Up sold over 1 million copies by October of that year, in the UK alone and, by June 2014, had reached 21.4 million streams.

Happy is the world famous (non-Grammy Award-winning) soundtrack to the sequel of the popular animated movie Despicable Me. [How did Let It Go from the Disney animated film Frozen outshine Pharrell’s top class track Happy? – Who knows!]. The song has sold over 1.3 million copies in the UK and, by June 2014, reached a total of 20.7 million streams.

Not only is Pharrell’s neo-soul, feel-good, cheerful and uplifting song incredibly catchy, he’s the first to have released a 24-hour music video, a concept that became a world event and created a viral-chain of home-made music videos around the globe.

Between May 2013 and June 2014, Blurred Lines had sold 1.54 million copies, reached 20.7 million streams and was nominated for two Grammys at the 56th Annual Grammy Awards, including Record of the Year and Best Pop Duo/Group Performance. The single was written and completed by Robin Thicke and Pharrell Williams in the space of an hour.

Inspired by Marvin Gaye’s Got To Give It Up, the similarities in “feel” and “sound” between the two songs led to a series of lawsuits and counter-suits between Sony/ATV and Marvin Gaye’s estate, regarding copyright infringement allegations. Finally, the two parties arrived at an undisclosed settlement.

The song’s controversial subject matter and music video nudity content was designed to attract attention and make the video go viral. Thrilled with the success of his song, Mr Thicke said: “I’m so honoured, the success of “Blurred Lines” is a dream come true”. The growing success of Blurred Lines is an amazing achievement for Thicke, who had never had a radio hit before the release.

Rather Be is one of 2014 summer soundtracks, release by the smashing electronic instrumental group Clean Bandit and featuring Jess Glynne. Released in January 2014 as the fourth single on their debut studio album New Eyes, the deep-house/synth-pop track, Rather Be, had reached 19.9 million streams in just six months. The song debuted at Nº1 on the UK Singles Chart and became the fastest-selling single of 2014, selling over 1 million copies since its release.

Radioactive is the opening track on Imagine Dragon’s debut album Night Vision. It received great acclaim from critics who referred to it as the “highlight” of the album. After appearing on various commercials and trailers, the song gradually peaked at Nº3 on the US Billboard Hot 100 Chart and became the American rock band’s first top 10 hit. The song also broke the record for slowest ascension to top 5 in chart history and holds the record for most weeks ruling Billboard Hot 100 – 87 weeks! Radioactive was nominated for Record of The Year at the 2014 Grammy Awards and took home the prize for Best Rock Performance. The song was the third best-selling single of 2013 and reached a total stream of 19.7 million by June 2014.

Counting Stars featured on One Republic’s third studio album Native (2013). It became one of the band’s most successful singles, reaching Nº1 in Canada and the UK, Nº2 in the US and within the top 10 in 20 countries. By June 2014, the track had reached 19.7 million streams in the UK alone.

American hip-hop duo, Macklemore and Ryan Lewis, released Can’t Hold Us as the third single on their debut album The Heist (2012). The song got to Nº1 on Billboard Hot 100 and became their second Nº1 hit single in the US. Lewis Corner of Digital Spy praised the song’s “infectious, soul-soaked piano line and beats more vibrant than Rio de Janeiro’s finest carnival floats”, granting it four stars out of five. The single received 17.2 million streams in the UK by June 2014.

We’ve compiled these videos into a playlist – click here to play them in Creation 5!