The World’s Most Fascinating Opera Festival 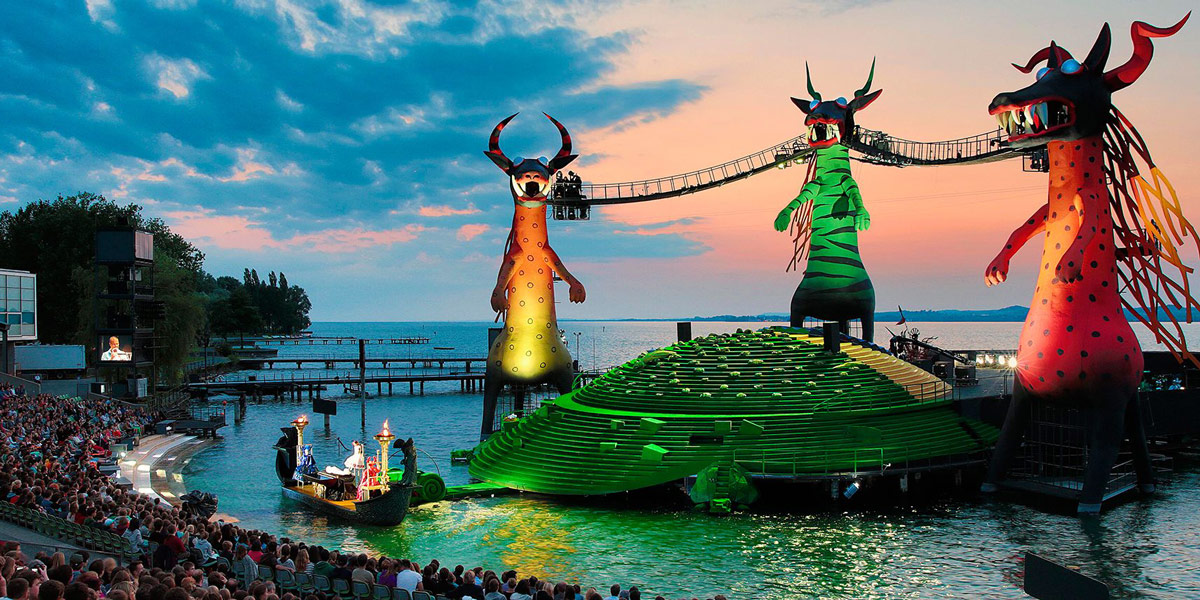 Operas are often perceived as dry and dull affairs and, indeed, many of them are. The Bregenz Festival in Austria, however, will surely change your mind. Held on the banks of Lake Constance, the festival is famous for not only the high standard of the opera productions, but also its amazing floating stage.

The first Bregenz Festival was held in 1946 – the week-long Bregenz Festwoche. The inaugural performance was staged upon two barges moored on Lake Constance – one carrying the stage structures for Mozart’s early work, the other the orchestra. In a town that didn’t even possess a theatre, the idea of mounting a festival seemed eccentric; but the initially makeshift solution of choosing the loveliest part of the town – the lake – as the stage proved to be a hugely successful one. Visitors from Austria, Germany, Switzerland and France made the Festival an international event in its very first year. The Festival orchestra from the outset was the Vienna Symphony Orchestra, which has made a major contribution to the evolution and success of the Festival. 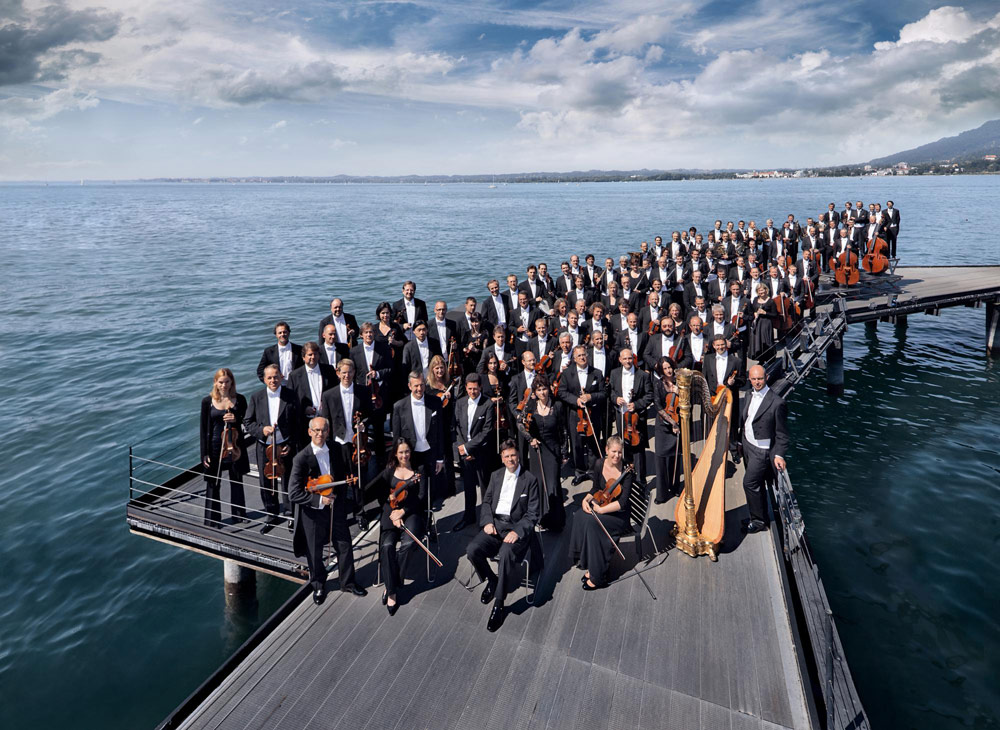 The floating stage faces an auditorium of 7,000 making it one of the biggest lakeside venues in the world and thousands of music enthusiasts from all over the globe come every year to experience “The play on the lake”. There’s a fabulous atmosphere as the audience enjoys a pre show drink and then settles down to enjoy the production as the sun slowly sets over the lake. 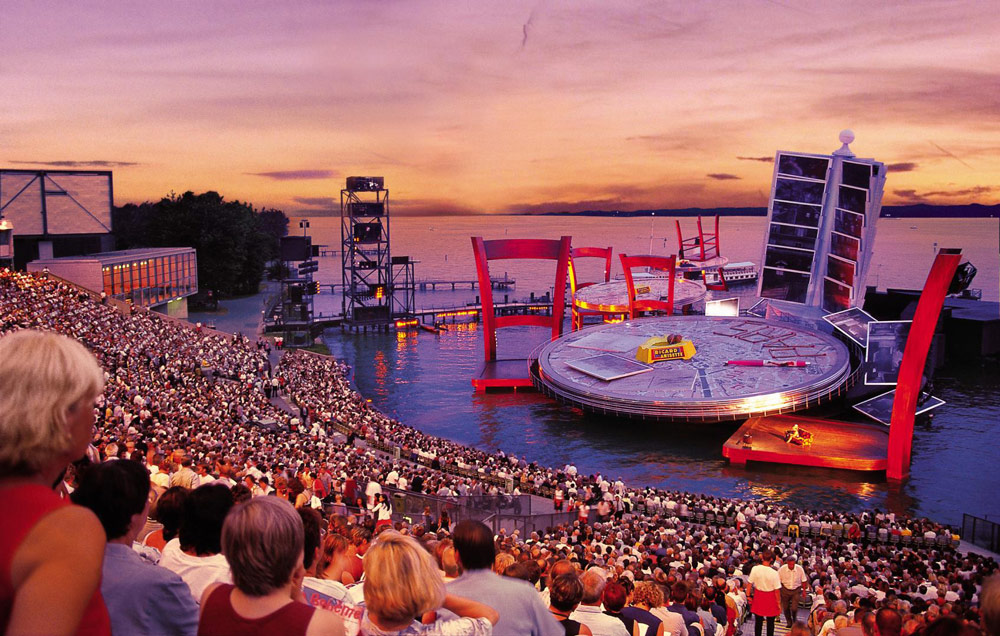 It is not only the spectacular stage scenery that impresses but also the wonderful music. This year’s Bergenz Festival had the motto “Vienna bitter-sweet”. Turning our attention to “wealth, poverty, charm, corruption, high spirits and neuroses, cultivatedness and deviancy, sensibility and sentimentality, friendliness and falsity”, this last season, under the artistic director, David Poutney, paid tribute to the “many-layered antitheses of Austria’s legendary capital, Vienna.”

The fantastic fairy tale opera, “The Magic Flute” by Wolfgang Amadeus Mozart was staged on the incredible floating stage. Directed by David Poutney, the opera played to almost 100% of its capacity, with just over 200,000 people witnessing the perfect performance for a magical setting. With an audience totaling approximately 406,000 over its two-year run, the opera achieved the best audience figures since the festival was founded in 1946, and is rumoured to have set a new record, surpassing the musical “West Side Story”, which drew an audience of 405,314 in 2003 and 2004.

Directed by Michael Sturminger and composed by Heinz Karl Gruber, the bitter satire about the mendacity and brutality of the petit-bourgeoisie, “Tales from the Vienna Woods”, was premiered for the first time. The opera sold out 97% of its tickets and was all in all seen by 4,074 people. 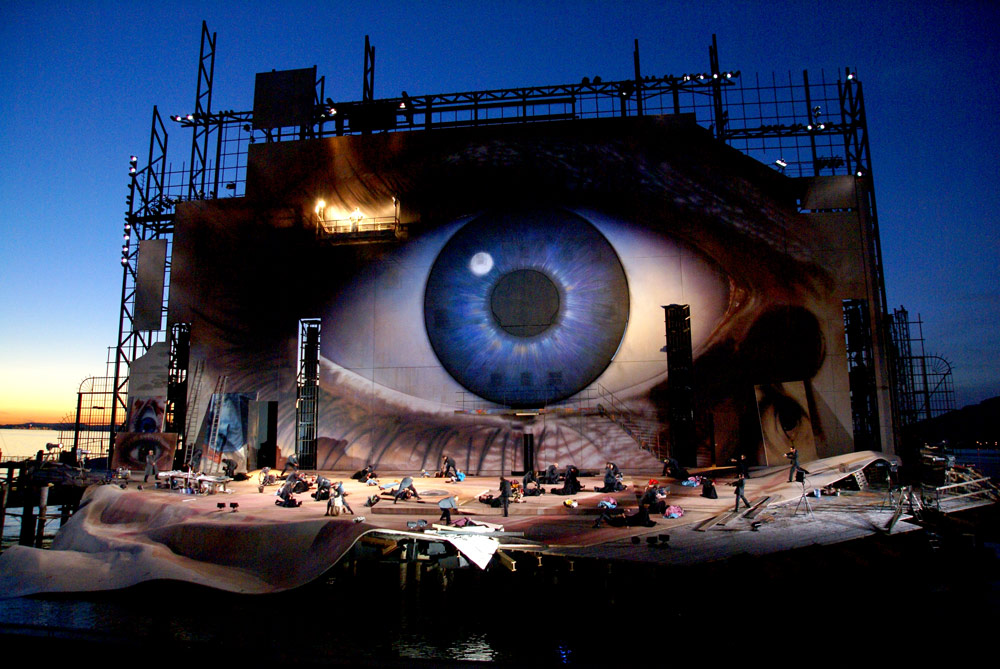 “Gloria von Jaxtberg” (Gloria – A Pig Tale), also composed by Heinz Karl Gruber, and directed by Frederic Wake-Walker in co-production with the UK’s Mahogany Opera Group and Buxton Festival, ran on two nights and was performed to 833 people, selling 79% of seats. The satirical opera tells the story of a pig called Gloria who falls in love with her butcher.

The festival also staged family operas in the Great Hall of Festspeilhaus, which consisted of two short operas played back-to-back: “Le Rossignol” (The Nightingale) by Igor Stravinsky and “L’hirondelle Inattendue” (The Unexpected Swallow) by Simon Laks. Described as “two enchanting tales about the power of song”, the operas were eagerly received by a multi-generational audience, which included children of six years old and over.

There was also a cross-culture program for children and young people between the ages of 6 and 26 and almost 6,000 participants attended the workshops, tours and concerts.

After 11 years of service, the Bregenz Festival said farewell to the festival’s beloved artistic director, David Poutney, who, only a few days ago, came to the end of his final season. Under the motto “Vienna bitter-sweet”, Poutney put together a multi-dimensional festival program that included four music theatre and three chamber music world premiers. His farewell concert, held last Sunday morning, heard the Vorarlberg Symphony Orchestra perform works by Leonard Bernstein, as well as “Der Schauspieldirektor” (The Impresario) and “Singspeil” by Wolfgang Amadeus Mozart in an adaptation by Poutney himself.

“David Pountney’s final season is the highly successful close of a sensational eleven-year era as artistic director, in which the festival has developed substantially and has created many artistic achievements and magic moments. My thanks go not only to David Pountney, however, but to all the artists and the personnel too,” said the president of the festival, Hans-Peter Metzler. “It is time to say goodbye. After such a marvellous season that’s as easy as it’s difficult. The festival has once again brought together the popular and the radical, the entertaining and the avant-garde, and has found its audience. That makes me happy,” David Pountney said.

The Bregenz Festival will return in the summer of 2015 and will welcome its new artistic director, Elisabeth Sobotko. Giacomo Puccini’s opera “Turandot”, directed by Marco Arturo Marelli, will open next year’s festival on the lake stage. Jacques Offenbach’s opera “The Tales of Hoffmann”, in production by Stefan Herheim, will be performed at the Festspielhaus, and the orchestral concert will feature works by Luciano Berio, Johannes Brahms, Felix Mendelssohn Bartholdy and Franz Schubert. Miroslav Srnka’s orchestral work “No Night No Land No Sky” will also be included in the program, along with performances of Wesendonck Lieder of Richard Wagner by the Vorarlberg Symphony Orchestra and Johannes Brahm’s Symphony No.4 in E minor.

The Magic Flute – Building of the Seebuehne (Lake Stage)

The Bregenz Festival 2015 will run from July 22 – August 23. Tickets for next year can now be booked online via the festival website:
www.bregenzerfestspiele.com

Labrinth – Let It Be

Labrinth – Let It Be