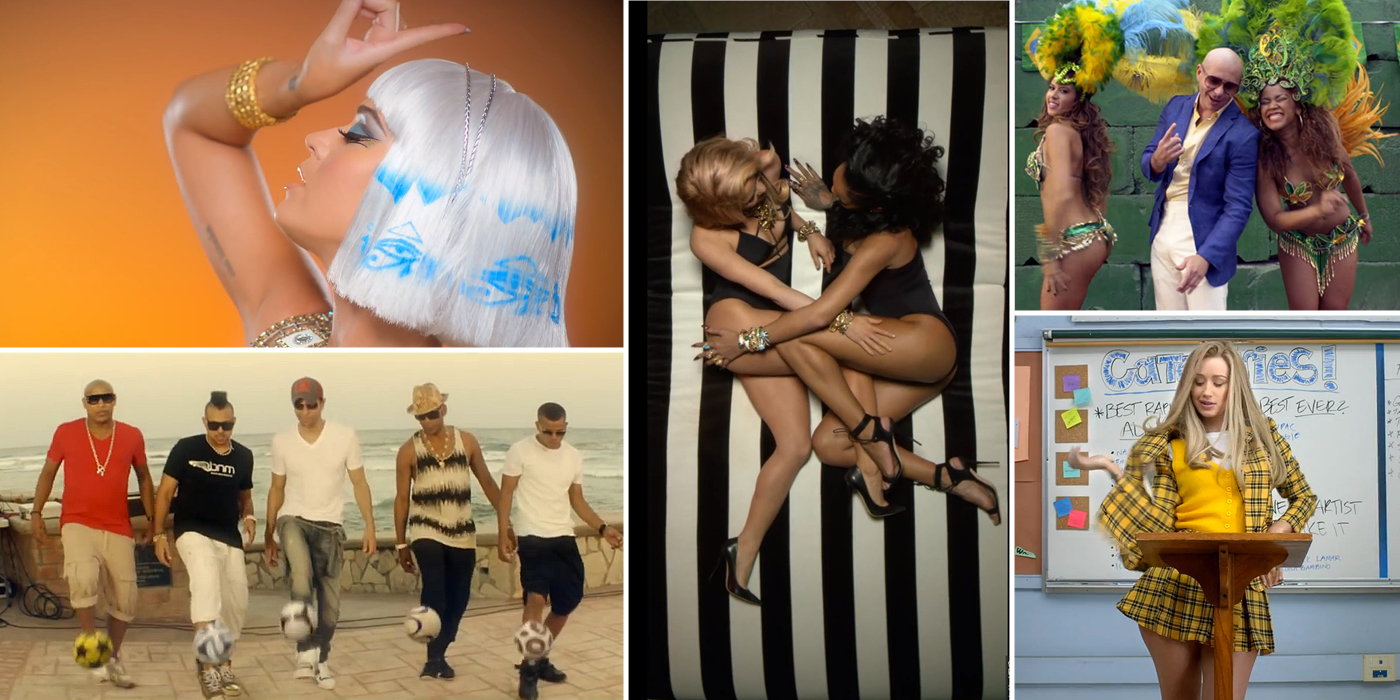 YouTube have revealed their list of the most played music videos of 2014 (so far) and Katy Perry’s ‘Dark Horse’ is the clear winner – by a sweet 100 million views! Sitting pretty in second place are the sexy twosome – Shakira and Rihanna with their over-the-top video for “Can’t Remember to Forget You”. Shakira appears twice in the list as does Latin heart throb Enrique Iglesias.

Katy Perry’s Dark Horse music video is the clear favourite to be the year’s top clip, with almost half a billion views since February! The clip sees Perry as an Egyptian queen with supernatural powers. The video has sparked quite a bit of controversy though among the Muslim community as Perry uses her powers to disintegrate a man wearing a pendant with the word Allah on it.
“Blasphemy is clearly conveyed in the video, since Katy Perry (who appears to be representing an opposition of God) engulfs the believer and the word God in flames,” wrote Shazad Iqbal in an online petition to have the video banned. Many similar petitions submitted to the website change.org have been met with counter-calls from YouTube to keep the video online in the name of “free expression”.

Shakira and Rihanna’s sexy video is only 100 million views behind at 360 million views. This video also caused quite a scandal for showing the two girls writhing around together on a bed and smoking cigars. A columbian politician released a statement saying that the video should be banned for promoting tobacco and lesbianism, the New York Daily News website reported.

This video ranked high on this top 10 for three reasons: 1) It was one of the official World Cup songs, 2) It’s Shakira (she now has 101 million fans on Facebook) and 3) It’s a great video clip, the best of the World Cup ones, and you even get to see Shakira’s football skills!

Another World Cup song by Pitbull feat. Jennifer Lopez & Claudia Leitte – this powerhouse trio is enough to rank up some hefty views, even without the influence of the World Cup. The song received positive reviews from critics, but also some negative reactions from Brazilians due to its lack of Brazilian ‘feeling’. To remedy that, another version was created and the music changed slightly to fit Afro Brazilian group Olodum’s style of drumming. It didn’t do that well commercially but did reach the top-twenty in a few countries including Spain, Italy, Germany, Austria, France and the World Cup’s host country Brazil.

This song is the Sound of Summer 2014 – at the top of numerous Latin charts it’s heard everyday on the radio. For a song that is mostly in Spanish, it’s interesting how it has become such a big pop hit. Perhaps Enrique is just the ultimate ambassador of the cool and smooth vibe. Or perhaps it’s because the song is so damn happy and feel-good that it cuts through all the clutter and sets your hips swaying…? Enrique himself told Billboard’s executive director of Latin content and programming, Leila Cobo, “Of all the songs I’ve written in Spanish, there’s something about this song, the more I listen to it, the more I seem to like it. There’s something addictive about this song.”

This video and song perfectly captures our cultural obsession with selfies. It might soon be relegated to a pop culture footnote but for now it shows no signs of dwindling. The Chainsmokers are Drew Taggart and Alex Pall and they recorded a demo of the track and uploaded it to Soundcloud and Instagram. It went viral and was picked up by Steve Aoki’s Dim Mak Records. Ok, so it was helped by TheAudience – a marketing firm that specialises in social media, but nonetheless no one can deny that it became a ‘viral sensation’.

This song has spent the majority of the summer to date at Nº1 on the Billboard Hot 100. It is the song of the summer. From Memorial Day to Independence day Fancy was downloaded 1.3 million times – that’s a record for a six week period. According to Billboard, since Memorial Day “Fancy” has a cumulative audience of 1.03 billion “listener impressions”. Fancy that.

The worldwide phenomenon that is the Frozen soundtrack – many have been surprised at the incredible success of this soundtrack. “When a musical grosses a billion dollars at the worldwide box office and features an inspirational album, why should we be surprised?” asks Glen Brunman, former head of Sony Music’s soundtrack unit. The time that the movie was launched made the ‘weather’ a key player in it’s success. With freezing temperatures, most Americans were confined to their homes and the album became a soundtrack to more than a movie. Disney fans have posted more than 30,000 versions of the song to YouTube with a combined total of more than 150,000,000 views.

What a great combination Derulo and Snoop Dog make! This track, lifted from the hugely successful ‘Tatoos’ album sees Jason and friends surrounded by bikini-clad girls enjoying a party at a huge mansion – it’s not difficult to understand it’s success!

The second single from Enrique’s album ‘Sex and Love’ – the song is the opening theme of Mexican telenovela ‘Lo Que La Vida Me Robó’. It’s the 5th time one of Enrique’s songs has been chosen as an opening theme of a telenova. According to reports, Enrique wrote this song eight years ago and was just waiting for the right time to approach Marco Antonio Solís, one of his biggest idols, to ask him to put his vocals on it. The music video, released in January 2014 was directed by Jessy Terrero and also features a guest appearance by televonela star Sandra Echeverría.