#ThrowbackThursday – 36 years ago the Sugarhill Gang, comprised of Big Bank Hank, Wonder Mike and Master Gee, were the first hip-hop act to debut on the Billboard Hot 100 charts. Several years before this the hip-hop culture had begun to take shape at parties in New York, specifically the Bronx and Queens, when people would spontaneously rhyme over a beat – hip-hop was all about performing at parties or clubs, not making studio releases. While it was not the first single to feature rapping, it is certainly considered to be the song that first popularised hip-hop around the world.

Sugarhill Records founder and CEO, Sylvia Robinson, put together the Sugarhill Gang trio to record their rhymes over the recent Chic hit Good Times. The final result was a 14-minute single, cut in one take that found the gang bragging about money, their sexual prowess, their brilliant skills at the mic and even complaining about stomach ache. Leaving out the stomach ache, the other 3 themes still resonate in hip-hop today.

The song is ranked at Nº251 on the Rolling Stone magazine’s list of The 500 Greatest Songs of All Time and Nº2 on both About.com’s and VH1’s 100 Greatest Hip-Hop Songs. It is included in NPR’s list of the 100 most important American musical works of the 20th century and was named as the Greatest Really Long Rock Song of all time by Digital Dream Door. It was preserved into the National Recording Registry by the Library of Congress in 2011, calling it “culturally, historically, or aesthetically significant.” At the time of release it went to Nº1 in Canada and the Netherlands, Nº2 in Norway, Sweden and Switzerland and Nº3 in the UK and Germany.

If you love rapping along to this and don’t remember all the words, check out the lyrics here.

C5 users: you will find this video in Playlists > Throwback Sessions 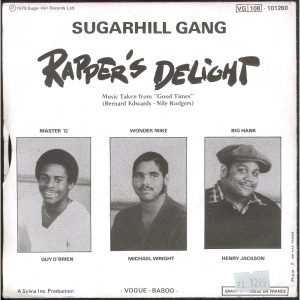