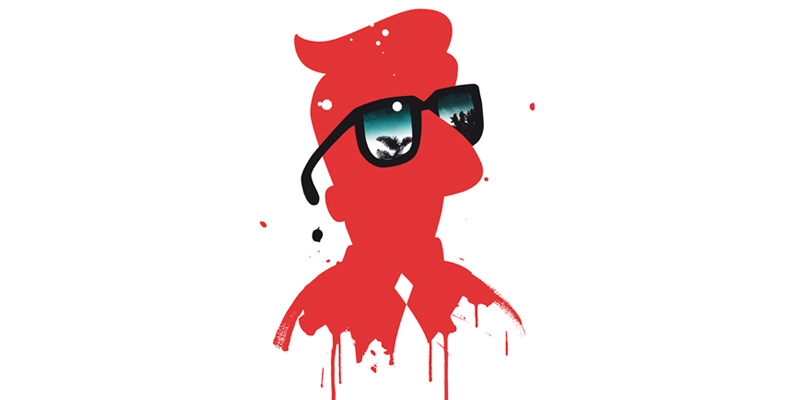 Guts – French electronic beat-maker and producer with a heavy hip-hop base pours his soul into his music and takes us on a mysterious and uplifting journey across continents. Guts is one of the co-founding members of Alliance Ethnik, the inspirational and trend setting hip-hop French band from the 90s.

His interesting use of contrast captures a whole range of moods and emotions – from a trance-like state to a carefree and joyful one. Guts’ positive island vibes that transcend his music leave us with a sense of intrigue and longing. Let him take you away to more than one place at a time as he tells a beautiful and sentimental story about how music and a joie de vivre can come together to form a life of serenity, peace of mind and perfect harmony.

Your first album release Simple et Funky in 1995 went platinum. How would you describe your experience with Alliance Ethnik?
The most beautiful experience one could dream of is when a band is formed and the magic works spontaneously. We arrived at the right moment and with the right musical and artistic direction. As our budget was “No Limit”, we were able to ask our label for anything we wanted, so we asked Bob Power to produce and mix the album… Bob Power is to post production and mixing what Ennio Morricone is to film music – a virtuoso… He created numerous albums in the 90s that turned into mythical ones. For example: A Tribe Called Quest, D’Angelo, Erykah Badu, De La Soul, The Roots, Common, etc… My experience with the band lasted 8 years, with memorable tours and travels, incredible encounters and collaborations.

Alliance Ethnik was active up until 1999 and it was only in 2007 that you released your first solo album Guts le Bienheureux. What were you up to during that time and what made you decide to go solo?
After Alliance Ethnik, I thought for a long time about heading for New York and taking my chances in the hip hop capital, but a love affair kept me in France. As a result, I composed and produced music for a diversity of French artists like Big Red, Passi, Svinkels, Sage Poêtes de la Rue. I also had some very enriching experiences in Africa and Jamaica in those days. As the years went by, I lost my way and grew tired of collaborating, to the extent that I left France for good. I went to live in Ibiza, which was the perfect place to find myself again and to try out my chances as a solo artist… it was the right choice because it worked.

The East Coast hip-hop scene has heavily influenced your beats and your time spent in Jamaica and the Caribbean seeps through your music. Can you tell me a little bit about your musical journey and the way in which it has evolved over the years?
It’s true. I have been totally immersed in East Coast hip-hop, which had a great influence on me. Later on, I became extremely interested in the way that music was sampled and recycled in order to produce hip-hop albums. My curiosity and my love for music did the rest. After having discovered the culture of Rhythm and Blues, Soul, Funk, Disco, I discovered Reggae, West-Indies music, South American music, African music and, finally, Eastern European music (Turkey, Poland, Czechoslovakia, Greece, Russia…), I became an album collector and dug into all genres. Recently, I discovered a whole musical heritage from Tobago and Trinidad, which is absolutely incredible. As a result, Mambo and I have decided to release a compilation album on a yearly basis, called Beach Diggin’, which is composed of our little pearls that have never been released.

Since moving to Ibiza from Paris, you’ve founded your own label, Pura Vida Music. What’s the story behind that and how has the gorgeous Spanish island inspired you and your sound?
The idea of founding the label Pura Vida Music came from the desire to release my self-produced second solo album and to form the duo Pura Vida with Mambo. I wanted a visual identity similar to my musical one – something I did with Mambo. The label solely serves as a way to release personal projects, nothing else. It was a good experience but the heavy workload was too much to handle alone.

With regard to Ibiza, I am convinced that it inspires my music. Its peace, its energy, its vibrations, the sun, the sea…. I try to put into my music what I get out of this island. It is no coincidence that I listen to so much West Indies music at the moment… I’ve found harmony in my life and in my music.

Where do you get your samples from and what’s the creation process behind the production of your tracks?
Every single one of my samples comes from my vinyl collection. I listen to several discs until I am struck or moved by a sound, a note, a loop, a harmony, a melody, and then I am off. I sample, I cut, I change the pitch and, eventually, I find an angle, an interesting twist and, if it works, I pursue my ideas and follow through with them, even if it sucks at the beginning. Once I find a twist that captivates me, I go on to add the rhythmic part of it as a base layer and then I try to tell a story with some transitions, bridges, variations, accidents…

Your most recent album, Paradise For All, covers a kaleidoscope of colours. The dark, melancholic strings and nostalgic piano lines, mixed with your sunny, reggae-soul and punchy feel-good rhythms, fill your album with a unique atmosphere. What message are you trying to communicate through your music?
A music that helps people to breathe more easily… a music that has virtues… that calms the pain… that makes you want love yourself and to love others.

It’s a great and intricate album – I see it as a kind of masterpiece. How has it been received?
I haven’t the slightest clue, as I never read the critics and chronicles of my albums. I don’t give a sh*t. Some people like vegetables, others don’t… it’s the same with my music. Art is ultra subjective, it’s impossible to please everyone and thank goodness for that. I don’t believe that Paradise For All is a complex album and a kind of chef d’oeuvre. It’s rich and diverse, it’s full of contrast, but the one I will be releasing in 2014 will be more complex, much richer and will have even more of a contrast. What could come across as complex is the pleasure that I have in fusing tracks with very different colours and universes in the same album. I don’t stick to one single direction and that’s what interests me… a change of path and unimaginable stories.

Your Django Remix EP came out in early 2013. What effect did Tarantino’s film have on you?
I don’t like Tarantino’s films at all. I’m not a fan of violence and blood in the cinema but his remake of Django is absolutely wonderful! Without a doubt, it’s my favourite film of 2013. He re-adapted the film Django in a great way and with great talent. For a long time, I wanted to re-adapt the soundtrack, I had dreamt of doing it and I loved doing it, when it came to it. I love the duality in Tarantino’s film. I like his mix of humour and darkness in certain scenes. I like the silence that alternates with the music and dialogue. I like contrast and that’s precisely what influences my music.
http://www.youtube.com/watch?v=sXYdIypoLsE
What can we look forward to in 2014?
2014 will certainly be the busiest and most exciting year since the end of Alliance Ethnik. I’m in the middle of writing my new album, which is supposed to be out in Sept 2014 and is the most ambitious and certainly the best one yet. I’ve invited quite a few artists from the other side of the Atlantic and by doing so, have gone back to my first loves. I’m also working on a French Hip Hop project with Blanka (Jukebox Champions/ La Fine Equipe), which should be out in May 2014, as well as another compilation album of Beach Diggin’ with Mambo. The end of the year will see the album release of a new artist called Asagaya, whom I absolutely adore. It’s an album that I have partly produced. Asagaya deals with all the musical compositions, whilst I ensure its recognition.

Guts chose our #SundaySessions this week, click here for the playlist.