Ariana Grande “My Everything” Album Review 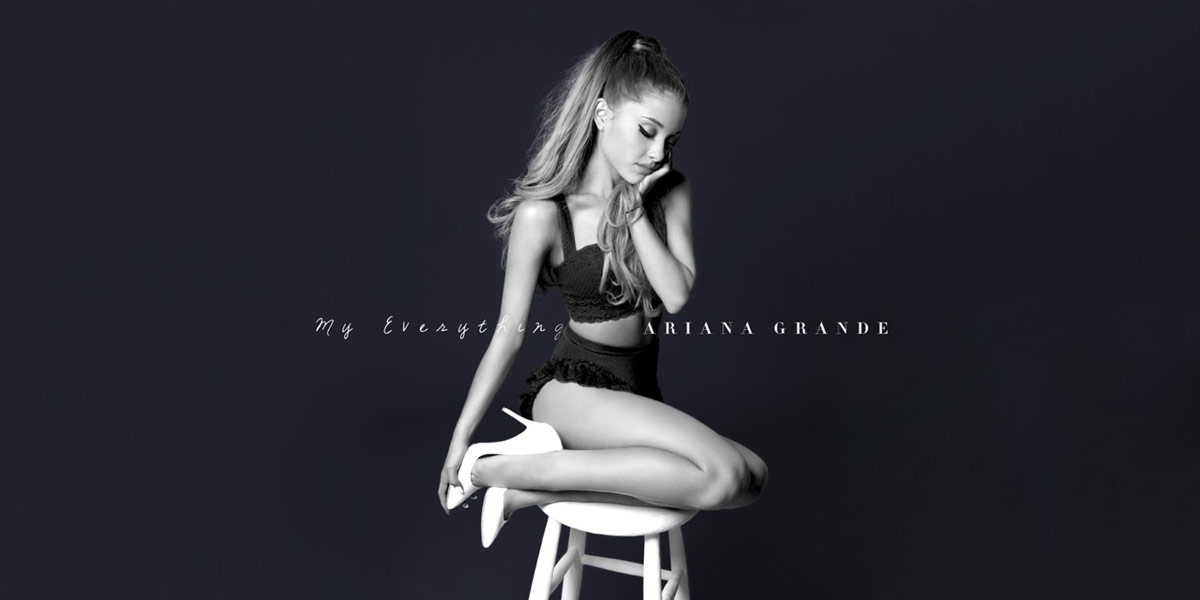 With 3 singles in the Top 20 on the Billboard Hot 100, a slot opening the MTV Video Music Awards 2014, and millions of fans watching her every move, Ariana Grande has made her transition from a Nickelodeon tween star to a promising global superstar look so effortless.

Tap a video title to open it in Creation 5!

Stepping away from her PG debut album “Yours Truly”, Ariana’s sophomore album “My Everything” has taken a big leap towards the EDM dance world and has turned her into a full-rounded and versatile dance artist, pop star, soul artist, as she continues to show off her greatest weapon – her angelic voice with an outstanding vocal range.

What’s more, Ariana has given us a little glimpse of her wild side, singing lyrics such as: “Picture me and you making/ Making sweet love/ Baby, give it to me”.

While her singles “Problem” and “Break Free” are energetic bangerz, and Ariana’s more melodious solo songs “One Last Time” and “Why Try” are flawlessly delivered like a pop diva should, her various collaborations, one could say, are hit-or-miss. Ariana brilliantly shows off her ability to team up with her antitheses, The Weeknd, in “Love Me Harder”, yet her track “Be My Baby” (ft. Cashmere Cat) is lost among the others. She could have also held back on the twerkable beats and A$AP Ferg’s appearance in “Hands on Me”, but it works (kind of).

All in all, Ariana has proven herself in her second No1 album in less than a year, “My Everything”. She sure knows how to get a room moving and she sure can make our hearts soar. According to Rolling Stone “she already is a major force”. The future shines bright for the 21-year old pop diva.

The intro to Ariana Grande’s sophomore album “My Everything” is an eighty second welcome to her fans, a reminder to everyone that her voice is still a sensation. Her lyrics “I’ll give you all I have and nothing less, I promise” is either a conversation the young diva is having with a specific person or a message to her fans that her latest album will not be disappointing. Let’s see what we’re in for…

If you don’t know this song by now then, I’m afraid to tell you, you’ve pretty much been living under a rock this summer. “Problem” ft. Iggy Azalea is the lead single on Ariana Grande’s album and it’s been topping the charts at No2, giving Grande her highest-charting single yet and bridging the gap between her debut album “Yours Truly” and her sophomore album “My Everything”. With downloads skyrocketing past the millions and over 185,000,000 views on YouTube, Grande has created a lot of hype with her triumphant “hip-pop mix of sassy brass, sharp clicks and celestial vocals”. While Grande stays true to her PG fan base, Azalea’s badass appearance on the mix sure adds a little bit of edge to Ariana’s virginal image and pop-angelic sound (let’s not forget her signature fluttering eyelashes).

Although “One Last Time” heavily sounds like Loreen’s 2012 Eurovision “Euphoria” anthem, Grande’s transition from R&B into light pop EDM demonstrates her coming-of-age and ambition on “My Everything”. Her lyrics “I know/ That you got everything/ But I got nothing here without you” convey the story of a young lady tormented with guilt, begging “one last time/ I need to be the one that takes you home/ One last time/ I promise that after that I’ll let you go” in the chorus. Setting aside her humiliation, she gathers up a sense of hope, above the bashing drums and three-note synth line.

Co-written and co-produced by One Republic’s Ryan Tedder and Benny Banco, who have a ridiculous amount of hits to their names, expectations were high when it came to “Why Try”. With it’s thunderous mid-tempo melody, great vocal power, militant drum rolls and a lot of catchy “na-na-na” hooks, Ariana made the hit production her own, with a jaw-dropping finale, shedding light on the pop-diva’s natural vocal abilities.

Some may call “Break Free” an easy chart hit, others may call it a very good pop song. Produced by EDM whiz, DJ Zedd, Ariana’s second single is the complete opposite of “Problem”. According to Jason Lipshutz from Billboard, the single “possesses a laser focus, with Zedd’s outlandish electronica serving as an icy platform of Grande’s towering hooks and forced rhymes”. He refers to it as “an underrated, enthralling dance single”. Indeed, “Break Free” is pretty damn catchy and is by far one of the most memorable tracks on Grande’s album. Also, the music video is quite out there, with aliens and lasers and rockets being fired from boobs. Ariana explains: “I never thought I’d do an EDM song, but that was an eye-opening experience, and now all I want to do is dance”! Overall, the track is like a huge balloon filled with lots of confetti! It’s fun!

“Best Mistake” takes the tempo down a notch in a moody ballad that grows on you the more you listen to it. Big Sean’s guest vocals voice an emotional confession between two lovers who are trying to make their minds up about the future of their relationship – a topic that has led to rumours that the pair is dating. Ariana sings with a deep and intimate vocal tone: “If the water dries up, and the moon stops shining/ Stars fall, and the world goes blind/ Boy, you know I’ll be saving my love for you, for you”. The song is yet another on Ariana’s album “My Everything” to reach No1 on Billboard. From EDM/electronica to pop ballads, the diva sure has us grasped tightly in the palm of her hand.

Be My Baby (ft. Chasmere Cat)

“Be My Baby” is a solid track on which Ariana’s vocals resemble Mariah Careys pipes. There isn’t much to add to that, except that it makes the next track on the album stand out…

Grande seems totally in her comfort zone as she sings about a scorned lover in “Break Your Heart Right Back”. Yet Grande picks an unusual subject matter to sing about over an upbeat brassy beat. The song is about a guy leaving a girl for another guy. Diana Ross’ iconic track “I’m Coming Out” is appropriately sampled and embedded into the song. Ariana explains “It’s one of my favourites on the album and it’s really funny because I believe it has happened to me. I’m not 100 percent positive but I’m 99.9 per cent positive … I would rather he cheats on me with a guy than with a girl any day! If I found out my boyfriend was gay, I would be like ‘OK!’ I’d be so relieved.”

Love Me Harder (ft. The Weeknd)

Two people from different musical worlds come together in a collaboration that works deliciously. The track perfectly slots itself under the label “mid-tempo R&B banger”. Its pulsating moody electro-R&B beats and lyrics that croon “can you feel the pressure beneath your hips/ I’ll make you feel like the first time”, the song sure is the spiciest on the album. We love this one!

A Little Bit of Your Heart

Co-written by Harry Styles, specifically for Ariana, “A Little Bit of Your Heart” is a heartfelt piano ballad, with lyrics that sing: “I’m a fool for you”, “Just a little bit of your heart is all I want” and “I’m not your only, but at least I’m one”. The soft harmonies that blend in to Ariana’s perfect high notes in the final chorus add to the emotional state of the track. It’s a sweet tune, but not the strongest on the album.

In “Hands on Me” we uncover Ariana’s slightly more naughty side. “Shirt off, high heels on/ Might be a little but I like that long, yeah/ Don’t let these eyes fool ya/ I can take it, hold nothing back, give it to me… Put your hands on me” she insists (alright then, Ariana!). The track kind of sounds like a mashup of Rihannah’s track “Cockiness” and Iggy Azalea’s “Fancy”, with frantic hip-hop beats. A$AP Ferg’s rap addition is a playful contribution to Ariana’s “twerkable verses”. It sure is the perfect way to say goodbye to Ariana’s Nickelodeon phase. If Miley did it and got away with it (sort of), then Ari surely can and with perhaps a little more class.

Ariana closes the album on more sober and emotional note. She sings “he wasn’t my everything ‘til we were nothing” as her vocals glide melodiously and effortlessly over her piano-based track.

The bonus edition features three more tracks, including the explosive “Bang Bang” with Jessie J & Iggy Azzalea – this decades’ version of “Lady Marmalade”- as well as “Only 1” – a “short, snappy and sumptuous” track – and finally, “You Don’t Know Me” – Ari’s very first anti-fame rant.